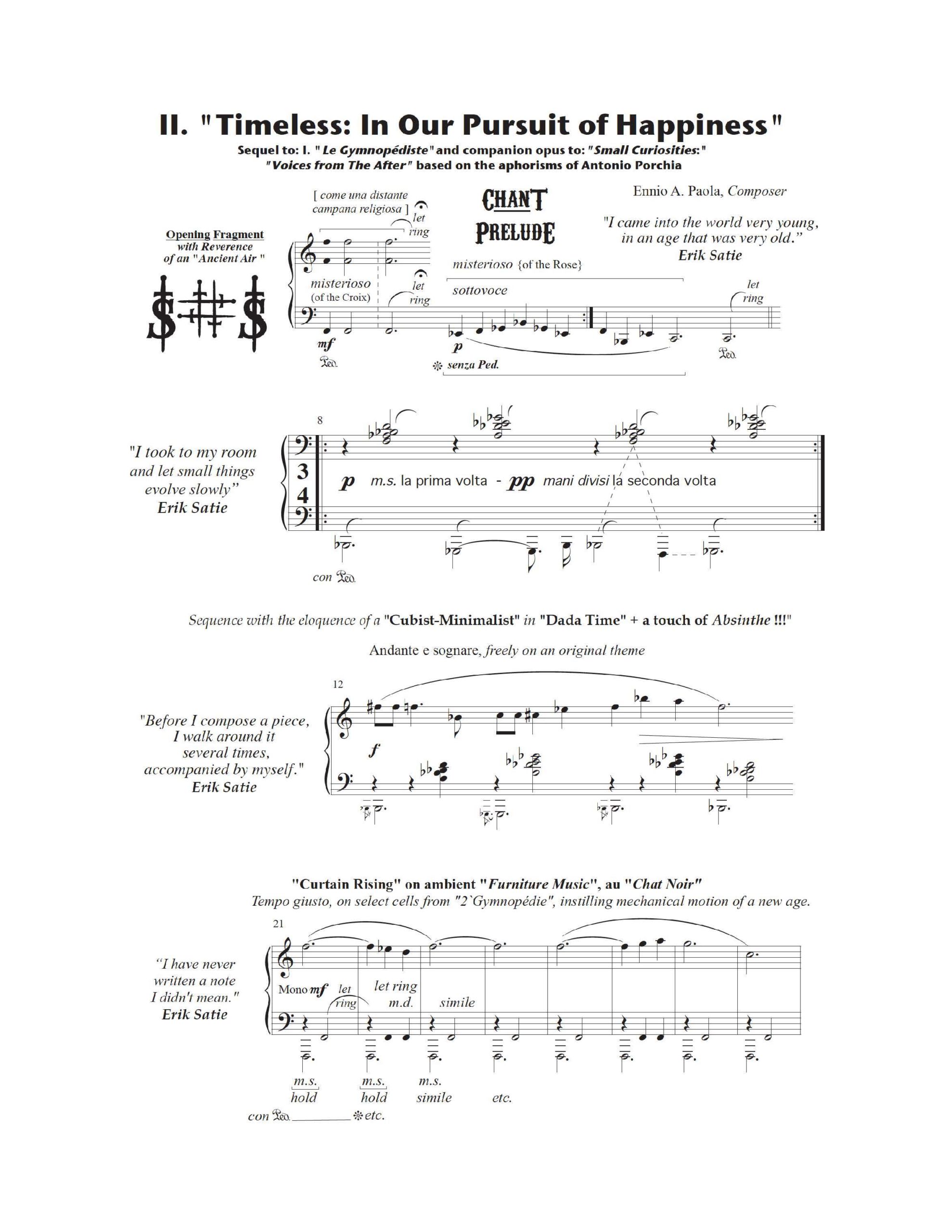 „Satie Obsessions“  is a piano collaborative project featuring the variations on the theme from Erik Satie’s Gymnopedie No. 2. The idea came from Kris Lennox in March. His suggestion was to create a modern Hexameron i.e many composers collaborating, and writing variations on a theme. „A coming together at a time when everyone was artificially forced apart“, says Kris. 6 composers from 6 countries (UK, USA, Canada, Italy, Costa Rica and Russia) united their creativity to compose their personal „Satie Obessions“ The role of Kris was to oversee a new creation: writing an introduction, tying the sections together and„letting the voice of the composers shine through“ and making one cohesive narrative. Listen to our  „Satie Obessions“ in Soundcloud and share your thoughts about Satie!

Kris Lennox (UK) about the project: „A fun project – perhaps the first of a number of such collaborations – but hopefully not due to government lockdowns!

PS I’d also like to add that Ennio’s score/scoring is possibly the most aesthetically pleasing scoring I’ve seen. A true work of art! „

Andrey Lubimtsev (USA) about the collaboration „We are all different, therefore it is very interesting to see the outcome when everyone has to follow the specific guidelines. Writing a variation on Satie’s one of the most popular piano pieces, was very exciting and fun!“

Ennio A. Paola (Canada) devotes himself to the research of Erik Satie work, times and artistic associates. His greatest challenge was to put decades of background into what went on beyond the scores on this particular score. He worked together with Satie Scholar and President of Satie foundation Ornella Volta and Prof. Robert Orledge. Ennio about this project: „Music is my life. As composer, from time to time I am offered music opportunities to add my voice alongside collaborative group efforts or events; thus contributing to the whole by exploring a variety of avenues through readings and research— creatively underscoring ah! ha! moments of newly learned discoveries. With years of study, and an admiration for all things Erik Satie, the prospect of joining a select group of collaborators to provide a new, fresh work based upon Satie’s 2˚Gymnopédie is most appealing and a welcome return to the haunts of M Le Pauvre; — from: Honfleur, Normandy, France – Le Vieux Bassin, 15th-century St. Catherine’s Church, to: Paris, City of Lights – Fin de Siecle Montmartre, Sacre Coeur, Cafés Chat Noir, Moulin Rouge, Salons, … writings — from: handwritten quips, quotes — plus novel, rule-breaking usage of musical terms and expressions, to: influencing and being influenced by visual artists, dance, film and literary associates scattered about during creative bouts with “Rose & Croix” and “Dada” movements. All Inspirational, all Satie — and as influential today as if it were yesterday —“Timeless: In the Pursuit of Happiness” — an honour and a privilege, to be continued …“

Vincenzo Napoli (Italy) was trying to capture the inspirations of the moment and then working on them very carefully and with passion.

Joel J. Seda Orona (Costa Rica) was inspired to write variation in the form of a fugue in the late Beethoven style.

Michael Dubovnik (Russia) wrote a grand finale. Michael about the project: „After some contemplation I decided to write Finale to that suite. To put it shortly, what I did was listening intently to Satie’s piece on one hand and to my life on the other and let them interact. I should say that it was rather challenging to me, even painful. Satie’s original is a very intimate and exquisite minimalistic piece, harmonically lush and melodically simple. And my life is a struggle nowadays, let’s put it plain. So I felt a bit like a soldier, who has only a few hours to spend with his delicate and shy young girlfriend and then run back to the front line. And it was a few hours literally indeed – an hour to go through Satie’s original, a couple of hours to compose and an hour to record and print it out. In some sense I feel she deserved more care. But life is life, and I feel quite sincere to the result that has come out.“