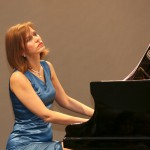 There is a saying as old as the world that the music is a universal language. Is it true? The diversity is the name of the game. The composers had different cultural backgrounds and spoke different languages. Did their mother tongue influence their compositions and do we need the knowledge about the language, e.g. German, in order to understand Mozart or Haydn?
Foreign languages have always fascinated me. Each of them has its own rhythm, melody, intonation… It gets even more exciting when it comes to the specific words that we understand only in the context of the culture where this language is being spoken. Like my favorite English phrase: “It’s raining cats and dogs”. And each language has something unique! English – being a language of business and travel, but also an “old English” being a language of Shakespeare. German – so concise and precise at the same time, with complex grammar and particular rhythm of the sentence. French – a bit vague and therefore, perfect match for the diplomatic talks, with exquisite melody. Italian – passionate language of love – very musical! For me, as a native Russian speaker, the Spanish would sound incredibly fast. I heard a remark about the Russian pronunciation that it is a bit harsh and not very smooth for English native speakers due to the falling intonation and consonants. I made an interesting experience when I was talking about the music in front of the international audience and they wanted me to introduce the pieces in Russian, German and English. The reaction of the audience surprised me. Despite the fact that it was the identical information, they were saying, it was as if I would have three voices and three personalities.
On that day, I was playing an international piano program where Mozart would follow my Debussy and Rachmaninoff went along with Beethoven. When playing through Beethoven Sonata, I suddenly remembered me speaking German and I thought that the Beethoven music phrases are like German language, the same pattern, and the same grammar structure! I had the same difficulties at the piano as five minutes before during my presentation.
Talking to the audience after the concerts, I noticed that in general, the German audience has problems with Tchaikovsky or Rachmaninov, let alone Skryabin. They find the music a bit “befremdlich” – disconcerting and outlandish. The other way round, I get suggestions to work harder on my Mozart and Beethoven, as they should be played “differently”.
Let me explain it in more detail through the popular communication model. It is an approximation of a real-life situation. There is a sender and a receiver for the communication to take place. I have three variables: a musician (a sender), composer (initial impulse) and audience (a receiver). I chose the Russian nationality due to my background, the word “Russian” can be any nationality.
There are four options.

Option 1. Russian musician is playing Russian music to Russian Audience
We hear and receive music through the filter of social and cultural context. Russian audience were exposed to Russian composers in schools and through media. They grew up with these melodies. As music takes roots in the folklore and folk songs, even in case of Skryabin who is considered “Pro-European” in Russia, you hear the Russian language melody in music composed by Russians. Russian audience would know what kind of person the composer was. I find that the psychological portrait of a composer or at least a slight idea about it might help us to approach their music. The audience could imagine what theaters the composers were visiting, what food or drinks they were enjoying, how society and political system influenced the composers, what the weather was like. istorical events in the home country are more familiar from school. All in all, the exposure to native composers is the highest in their motherland. In my model, I would presume that the performer has inhaled this music from an early age. I guess the both a musician and the audience speak the same language.
Option 2. Russian musician is playing Non-Russian music to Russian Audience.
When a Russian musician ventures out to present Non-Russian music to Russian audience, receivers might have no idea about the cultural environment of the music they are listening to. When audience is open and curious, this program will be a real cultural journey. In case of more conservative audience, creating the context would help to make the program more appealing to local audiences. The program notes, introductory talk about the composers and their background, some dia show, video installations might be a way of preparing the audience for more enjoyable listening.
Option 3. Russian musician playing Russian music to Non-Russian audience.
It goes without saying that the musician might not sell many tickets in the first place, but if people come to listen, they are true fans of the program and the Russian musician with Russian repertoire is a star! Authenticity wins! It makes me think of Denis Matsuev solo concerts in Munich! He played Mussorgsky “Pictures of Exhibition” and rocked the boat, although there were many free seats. Today, when we have a free access to the recordings of e.g. Skryabin played by pianists of different nationalities, I would still take time to listen to Russian old masters like Heinrich Neuhaus or Vladimir Sofronitsky.
Option 4. Russian musician is playing Non-Russian music to Non-Russian Audience
The fourth option is the most frequent case in big concert halls nowadays. The feeling of playing Ravel for French, Beethoven for Germans for any musician who is coming from a different culture is awesome. Every country has the so-called traditions or even schools based on these traditions how to play their own national music. They are rock-solid in the minds of the audience. Like a foreigner speaking the language with a charming accent, international musicians bring creativity and freshness into the “national” repertoire. Any fresh ideas can make performance very interesting. Different phrasing, new accents, and perhaps even a complete new vision of the piece will help to make the “museum” Mozart sound very modern. Just thinking of Fazil Say and his interpretation of Mozart Sonatas. Diversity keeps the classical music alive.
What is your experience with listening and playing music of composers from your native country and other countries? Do you feel the connection with the language? Do you feel the difference? Thank you for sharing your thoughts with me.