Wake Up, Listener! Notes on the Classical Music 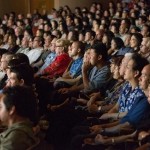