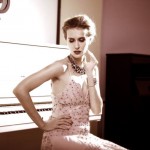 Warming up · Kim So Hyun

Tchaikovsky – Dubovik – Reminiscences of the Waltz of the Flowers