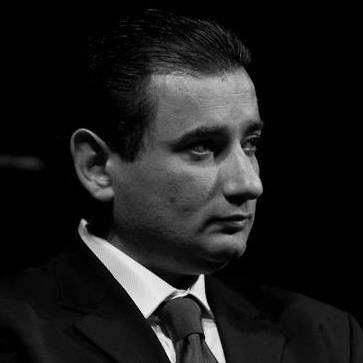 Vincenzo Napoli was born in 1975 in Sant’Agata di Militello (Messina, Sicily). He lives in Santo Stefano di Camastra (Messina) and he graduated in clarinet under the guidance of Master Vincenzo Cecere with whom he continued marching band instrument studies until 2001.

In 2005 he obtained the Quality Teacher Status cum laude at the Music Conservatory V. Bellini in Palermo, with a thesis entitled: “creativity in music pedagogy”. In 2007 he earned the Quality Teacher Status (Sissis) at the Messina University. In 2009 he achieved a Postgraduate Degree entitled "Theory and methods of multimedia technology use in arts and music teaching in Secondary Schools" at the University of Salento. He was a member of the Navy band and played as clarinetist under the guidance of master Luigi Franco. From 1999 up to date he has taught in different public and private schools, looking after projects concerning the musical area. Today, he is teaching in a college school in Santo Stefano di Camastra. He is registered to the S.I.A.E. in the Music section as a composer. He is the author of numerous compositions for bands, wind orchestras, chamber music groups and many of his compositions have been published by Comar23 and Scomegna .

He received numerous honors and awards: he won the National Composition Competition for unpublished marches for the Holy Week "City of Mottola" (Ta), achieving the 1st place in 2004, the 2nd place in 2005 and 2006 and 3rd place in 2007. He also ranked 2nd in the Fourth International Prize "Giuseppe Sciacca" Chamber Music, Vatican City in Rome. He won the first prize at the V International Prize for “Art Mecenate” music section, City of Arezzo. He also was finalist at the National Competition for Marching band compositions "City of Allumiere" Rome. In December 2018, he won the Bronze medal at the “Global Music Awards” composition competition in La Jolla, California.

His compositions have been performed in Italy and abroad: Spain, Belgium, Greece, Malta, Portugal, Colombia, Guatemala, Russia, etc .. They have been performed, in particular, in Spain by the Municipal Banda de Música of Almeria, that inserted them into a series of concerts in the program of the VI cycle of Sacred Music in 2009. In 2010, moreover, the composition "Almeria" dedicated to the Municipal Banda de Musica de Almeria was performed: the song has been inserted into the 2010 Spring Concert Season that took place at the Theatre "Apolo" of Almeria ; the composition was much appreciated both by the public and by the Italian and foreign press . In 2011 was performed, again by the same band and in the same theater, the composition " Pasodoble de Villa" , included in the 2011 Spring Concert Season . In 2012 the Philharmonic Rossini of Florence executed the composition for wind orchestra "Scene Sinfoniche." The song was included in the Concert Note Tricolori which took place at the Theater della Pergola in Florence. In 2014, was performed a composition for quartet “Serenata Siciliana I” at the Giacomo Puccini Music Conservatory in Gallarate. In 2018, were performed some compositions for harp and for harp and flute at the Santa Cecilia Music Conservatory in Rome: “Risvegli primaverili”, “Nostalgie siciliane” and “Viaggio del gabbiano”. In 2019, were performed the compositions for harp “Risvegli sonori” and “Verso San Pietroburgo” at the St. Petersburg Chamber Opera. In the same year was performed the composition for harp “Inquietudes et Caresses d’amour” at the Salisbury University Maryland

In addition, his compositions have been broadcast by leading international radio stations including: Radio 101 Radiobanda.com in Malta and Spain. He has played in various bands. He has collaborated with various musical associations as a clarinetist and composer; particularly worth mentioning is the collaboration with the Musical Association "G. Verdi" in Sant'Agata di Militello. He composed for the 1st International Symposium of the Horn the song "Horns on the shore", commissioned by Master Luca Benucci, 1st Horn of the Orchestra del Maggio Musicale Fiorentino, performed first in Sant'Agata di Militello; the composition has also received praise from major overseas musicians such as Master Dale Clevenger, 1 Horn of the Chicago Symphony Orchestra.

For me, music is life.

According to me, music is not merely fantasy, but also it is emotions, sensations , creativity and technique.

I can’t imagine my life without music

I’m a little worried, but I hope that the classical music audience grows in the future.

About the changes of music role in the 21st century, I think that music have to came back to its ancestry nature: to communicate, give emotions. The experiments are important but without exaggerating.

Creativity is more important, I believe so much in ideas that come suddenly, but it is necessary to capture and work on them. Often I have an inspiration in unusual place as restaurant, while I walk in the park o stay with my friends. Obviously I have to development the ideas with composition theory, knowledge and technique. In my works another important element is the researched melodic line, it is the main way to describe an history, I like travel and to make the audience mind travel with my sounds. People tell me that my music evokes images.

We have an important role: I think we should take by hand and guide the audience. First of all, I believe that we have to propose easy to listen pieces. In a concert, for example, it is better to listen more little compositions, than two that during 30 minutes.

When I compose I don’t use the same way, I don’t have only one creative process. In the last years I compose when I needed to do it or when I had a suddenly idea. One of my favourite compositions is “Inquiétudes et caresses d'amour“, I began to work on it when I received a call, I played the firsts notes and then I started to write a theme in D minor. This theme was characterized by melancholy, but it wasn’t dramatic, because the sadness flows away. Then I passed to major way to bring back serenity.

Can you give some advice for young people to who want to discover classical music for them selves?

Yes, when I compose, I think and imagine the audience. For me, it is very important that music reaches the listener e involves him.

In the last year I composed about 10 pieces for harp, harp and flute. In this period, I am working on musics for harp and other ensembles. I like to get involve myself in many way, with a little bit experiments and innovations.