Melanie Spanswick is a versatile musician: pianist, teacher, author, writer, adjudicator, presenter and composer. Her compositional style is influenced by Minimalism, so the movements are tuneful but with an emphasis on harmonic development, whilst also featuring repetitive structures.

A graduate of the Royal College of Music in London, Melanie studied the piano with Patricia Carroll, Tatiana Sarkissova and John Lill. Whilst at the RCM, she won many eminent prizes including the Ziff prize for the most outstanding postgraduate pianist, Arthur Bliss Prize, Marguerite Long Chamber Music Prize, a Leverhulme Trust Award, and she graduated with a Master’s degree in Performance Studies.

Melanie has performed extensively as a soloist, chamber musician, and accompanist at most of the major UK concert halls, and for numerous music societies, university concert series’, and music festivals, including Windsor, Cheltenham, Brighton, Southwark, Prussia Cove.

International performances include appearances throughout Europe and in Canada, USA, Bermuda, and Russia (including a performance at Tchaikovsky’s house in Klin). She gave a recital series at The Great Romantics Festival in Hamilton, and has performed at the Guelph Festival, also in Canada. Performing for the Queen Mother and Queen of Denmark are particular highlights.

In recent years, Melanie has established herself as a respected teacher and educational piano writer: her popular book So You Want To Play The Piano? (Alfred: 2015) has been revised and republished, and The Faber Music Piano Anthology (Faber: 2016), compiled by Melanie, consists of a collection of 78 favourite works.

Play it Again: PIANO (Schott) is a two-book piano course with a collection of 49 graded pieces from elementary to advanced level, featuring detailed practice notes for every piece, intended for those returning to the piano after a break. Published in 2017, this course has already received much critical acclaim.

Melanie regularly writes for major international music publications including The Stage, Piano Professional, Piano Journal, Music Teacher Magazine, International Piano Magazine, Clavier Companion, Rhinegold Publications, Pianofforte (published by Faber) and she has also written for the Daily Telegraph. Melanie is a contributor to Pianist magazine, writing a ‘how-to-play’ article in every issue. She co-writes the ABRSM Piano Notes series (published by Rhinegold), and has also co-written the performance notes for the London College of Music piano examination syllabus 2018 – 2020.

A committed teacher, mentor and coach, she frequently tutors workshops in Germany, running a bilingual piano project near Düsseldorf, and has given master classes for EPTA (European Piano Teachers Association), the Overseas Masters Winter Piano Academy held at the Yehudi Menuhin School, and is a tutor at Jackdaws Music Education Trust in Somerset. From 2018, Melanie will be a faculty member of PIANO WEEK, a touring International Piano Festival and Summer School.

Melanie has examined for the Associated Board of the Royal Schools of Music, she adjudicates nationally and internationally for the British and International Federation of Festivals, and is an external moderator at Royal Holloway University (London).

She adjudicated and gave master classes at the 2016 Chicago Amateur Piano Competition, at the 66th and 70th Hong Kong Schools Association Music Festival, and at the 2017 Performing Arts Festival in Singapore. Melanie recently gave a series of workshops, presentations, and master classes throughout Singapore and Malaysia, also presenting at the UCSI University Piano Pedagogy Conference in Kuala Lumpur. During 2018, she will be directing workshops and giving master classes in Singapore, Indonesia, Malaysia, Thailand, and presenting a piano teacher’s course in Hong Kong.

As a composer, her piano compositions (published by Schott and EVC Music) have been featured in various publications including Pianist magazine and the International Piano Magazine, and they have been included on British and International Federation of Festivals syllabuses.

Melanie has curated and presented an interview series entitled Classical Conversations speaking on camera to some of the world’s finest pianists. 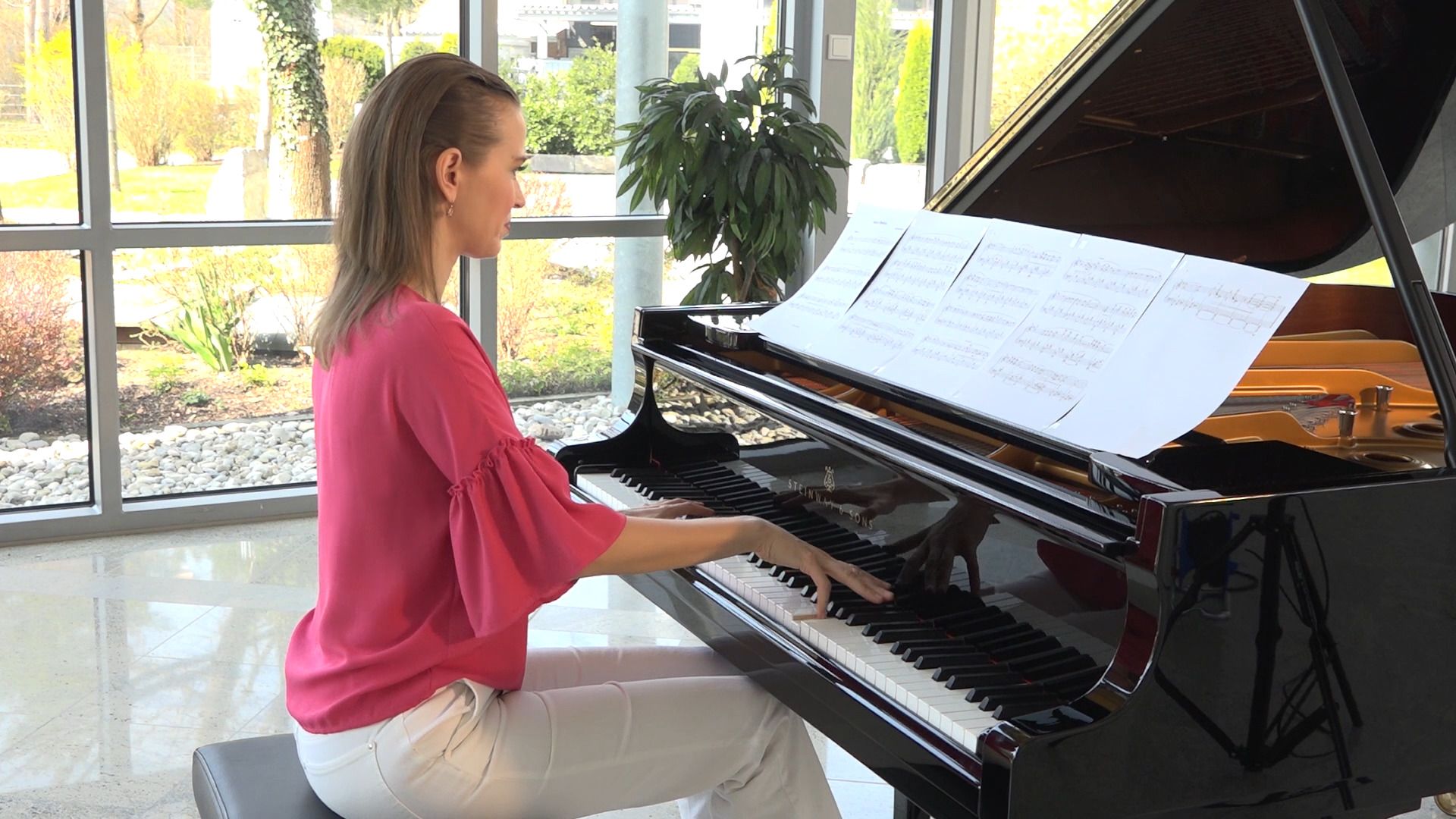 Music has been a way of life for me since I was 10 years old (when I started to learn to play the piano). I‘ve been incredibly fortunate to have always made my living as a professional musician, and I hope it’s something I can continue to do. For me, music conjures memories, feelings and emotions; these might be happy or sad, but they have the ability to transfix our soul.

I agree, it is! Music can transport us to another place. Much depends on the style and genre – we are all affected differently, but when it resonates, it can simply fill our hearts with joy.

If you were not a professional musician, would you have been?

I’ve become increasingly interested in psychology, so the job of a psychologist appeals. However, I would absolutely love to fly a 747 jumbo jet – perhaps it’s still not too late to fulfill this dream!

It does generally attract an older audience, but it’s always been this way. When I was a student playing to a much older audience was par for the course, so I don’t think much has changed. The challenge is to interest younger people in classical music and the best way to do this is to introduce it in schools.

I think it will continue in much the same vein unless there is a radical shift. If we can convince those in power to consider music education for all, enabling us to really inspire youngsters via music, then we may be able to change or transform the role of classical music in our lives.

It will probably only transform via education – if it can be presented as an attractive, viable option for children and young people, then it will become accessible, as it has in other cultures.

Do you think that the classical musician today needs to be more creative? What’s the role of creativity in the musical process for you?

Yes, creativity is vital; both for the soul and in order to find employment. I love writing about the piano, piano music, and how to play the piano. This process is enjoyable for me, and I hope it is helpful and useful for my readers too. I also love composing; writing music, especially for my instrument, is therapeutic and fun. I started by writing educational piano music for students (who have enjoyed playing it), but I am increasingly accumulating more commissions from professionals, who also seem to like my tuneful, simplistic approach.

Do you think we musicians can do something to attract the younger generation into the classical music concerts? How will you proceed?

If we can help young players to discover their talents and we can nurture their ability, then this is probably the best way to attract the younger generation to this genre. Most children have some aptitude, and they tend to respond best when they are involved and are able to play instruments for themselves. I enjoy working with young people, teaching and coaching them to become accomplished players; this should ideally be done in conjunction with an introduction to classical music as a whole. Going to concerts, listening to lots of music, and sight-reading through pieces are all beneficial activities.

Tell us about your creative process. Do you have your favorite piece (written by you). How did you start working on it?

I need a deadline to work optimally. If a work must be finished within a certain time-frame and for specific performers or a particular project, then my mind whizzes into action! I usually start at the piano. I decide on a key (I tend towards minor keys), and then focus on melodic development. But for me, the importance of harmony outweighs the melody. I love harmonic progressions, especially the use of more unusual chromatic twists.

My favourite piece so far is a suite for piano duet commissioned by a wonderful piano duo. The work consists of five short movements, each one with a different sound. I worked on the last movement first, essentially working backwards (I like to do this). My style is influenced by Minimalism, so the movements are tuneful but with an emphasis on harmonic development, whilst also featuring repetitive structures. The piece was first performed in November 2017 in the UK.

I think this is a wonderful idea. It kindles a stronger attraction to the music, and adds another dimension. I love music and poetry; a few years ago I regularly performed recitals with a narrator (or orator). We toured around the UK and Canada, performing many works written for this combination. Audiences were struck by how the music enhanced the text, adding emotional depth.

Listen to as much classical music as possible. YouTube, Soundcloud and the like have made it possible to hear almost anything instantly. Do some research, discover an assortment of diverse styles and aim to listen to a different work every day. By hearing a large cohort of music, favourite styles will be quickly identified.

Marketing will perpetually be an important aspect of any business – music or otherwise. It’s a sad fact that if we don’t introduce audiences to our music, then it will remain undiscovered. I write a blog and run a popular Youtube channel, and I hope this helps in my quest to draw attention to my books and compositions.

Do you have expectations with regards your listeners, your audience?

I have no expectations at all. I hope they enjoy hearing tuneful, atmospheric, cinematic music. I also hope pianists like playing the pieces, and find them well written for the instrument.

I‘m writing more educational text books and I‘m also writing various compositions. At present, a two-piano work for a two piano team with who I am collaborating on several educational projects. I‘m open to ideas and therefore do like to experiment with projects and with many music combinations; whether that be writing, composing or teaching.