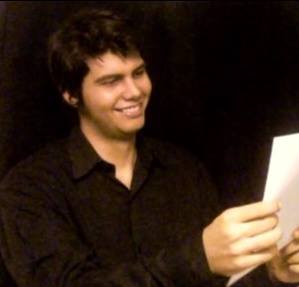 He made his first studies in recognized schools and 8 months a part of it in the city of Sunrise, Fl, U.S.A., when he begins the adolescence validates the high school doing four years in the time of one and a half. Before finish the school and also at school, he began music studies with private teachers of many different areas of music and at music academies, he also attended recording studios where he learned the commercial musical system among other knowledges. After failing to have become in a skillful singer, he devoted himself only for the piano as a musical performance and ending the singing as a result of chronic luxation in the mandible. v After completing basic studies of music, he aspired and traveled to Bogota in order to start the piano program at Colombia National University, but decided not to take admission test, he studied psychology at San Buenaventura University headquartered in Cartagena and philosophy at Cartagena University both careers one semester, and one semester of music at Adolfo Mejia Navarro Conservatory, a year later he repeats it and he retires again.

He worked as a pianist in bar-restaurants as well in events also as music teacher in schools and as a private tutor until his 21 years insomuch as he interrupted his work because he traveled also avoiding the obligatory Colombian military service to Salzburg, Austria, where he applied to the composition program at Mozarteum University but he wasn't admitted, failing only one part of four of the examination, then he went to Vienna and he started studies in the Jazz program at Margarethe Prayner Conservatory where weeks later he retires, just after he was applying for the musicology program at Vienna University, after 1 year of preparatory courses at Vorstudienlehrgang der Wiener Universitäten didn’t continue them and travelled to St. Petersburg, Russia for one year in order to solidify his Russian studies at Политехнический Университет one semester. He came back to Vienna, continue the preparatory courses for musicology and became finally musicology student. At this time he started Dutch studies at Volkshochschule 6 months but after becoming disillusioned about how people live in the Netherlands, he does not continue this language and decides to stay permanently in Vienna.

He has many recording projects especially with Beethoven, Scriabin and Scarlatti independently of his own compositions and he wants to initiate his own not-for-profit music school particularly for kids and youth with music already as a life goal. He’s also polyglot, he made courses in other 3 languages, speaking fluently Italian, English, German, his own mother tongue Spanish and a basic level of Russian. He is also member of the Vegane Gesellschaft Österreich.

This question is too complicated to give general answers or meanings but I decided to keep living because of music, is the only force, desire and sense I find in my life. I know this answer can be too generic, simple and even romantic, but it is better like that than writing a book here.

I do not really understand the question, it depends from which perspective is the question about. But to answer is 70% no and 30% yes, music for me is vibration, everything is music for me, is everywhere. What I imagine and write down comes from my will, my will as any other being is subjective therefore fantasy. But as I said music is not only what humans think it is ... it is also an organic matter, so I don’t know if I could agree that “water is all about fantasy” … as poetry could be nice.

There are actually a couple of things I would like to be but unfortunately we do not live forever so there is only time for one thing, I mean at least in music that does not really give you time for other things but for example I really wanted to be a mathematician, linguistic, a sportsman and of course an emperor. If I have a life without worries in some future I will invest time in those subjects... but in the end they are all in the name of music ... so I do not know ...

Well classical music has always been as it is also in the social aspect the same as popular music, this means that since ancient times this perspective that we have of it in the sense of the question is not new. I actually would even think the opposite because the internet anyone can have easy access to classical music. But in the end, it has never been a different for me...

Of course I see a transformation, and it is about to be the biggest of the whole history, but specially because the digital access we have to music, now it should be the best time for the greatest music creator of all history, at least the ingredients are there, but if this is going to happen, it is a different envision.

I would not like to give a definite answer for this, but unfortunately it really looks like, that the creativity level is far away from what it was even able to do time before, I use to think that it is because of so many new distractions we have nowadays.

There are many musicians that are doing that since time ago, maybe a good example is making songs with singers of two different genres. I personally have so many strategies to do this, just one for example is making arrangements of popular songs, like to orchestra.

To be honest this is one of the hardest questions, it is really hard because many reason but I am not going to get deep into that why now, I mean when is about which is my favourite but about the creativity process is easy to answer. Anyway I think the second movement of my first symphony if it is not my favourite at least I feel I achieved a little of my music goals when I listen to it, I feel proud and also the pleasure I was looking for. There is till now always a dissatisfaction, the feeling that is not complete that can be always better, but one has to get further and I accept the pieces how they were. At that time, I was around 19 years old, (just like yesterday for me) and I just wanted to explode (also now) to make the music I am able to do, I wanted to do something great, so no necessarily the symphony is the greatest way in music, but is is true that there are some many notes that cannot be just like that in a piano…

Unfortunately mine personal advices maybe are not well seen to be written here. But to answer something simple, I would just say that understanding music can be a process, this means that it can be normal if one does not like a piece after hearing it the first time, that we have to make the sacrifice to hear to the piece many times till we like it, when our ear gets more developed then we would easier time to time listen to anything and to appreciate it. That is also why it is so important to at least have the music subject in school, even if it is just a little it can make a big difference.

Well of course I am part of the audience too, I see it not just as any particular reason but also in a history audience point of view, I mean not just the audience of today but of any time, I know what people like, what do not, I know what I want them to think and feel, this is not gamble hahaha is a power.

There are so many projects I have that I would not write them here, the main problem is time and well also laziness, I have all in my mind since so long I just have to write it down. But I am planning to compose very soon after already 3 years without composing a series “long wave” “many pieces” of string quintets based on any tonal system but no the traditional western one, and also with mine tonal systems, but this actually takes more time than usual, sometimes I imagine if I would be in some kind of jail , where the 4 walls could make me compose and nothing else, like happened with Rossini composing the The Thieving Magpie overture one night before the premiere just because his father locked him in his room... I could say I experiment with my projects but I always feel and know what I am doing that it never feels like just experiments, it is just the way how I am.