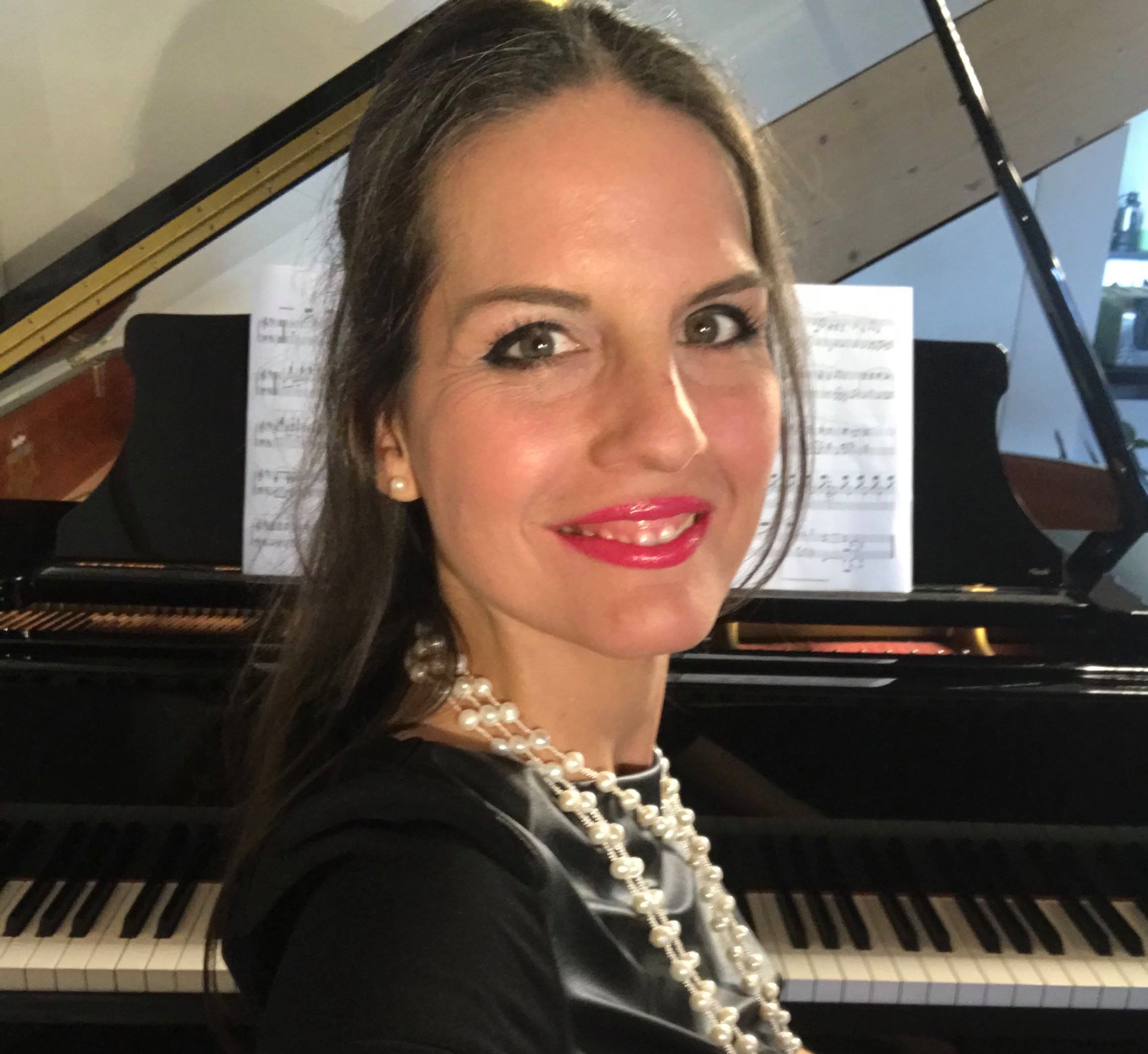 Mailyn Rebecca Henseler is a Swiss-German piano pedagogue, pianist, author, singer and composer who grew up in the Black Forest in Southern Germany.

Since the age of 7 she has been playing the violin. A few years later she started with her piano studies and singing followed. Mailyn had the chance to be part of a study group, which applied the insights of early brain research on the process of learning to play the piano more easily, efficiently and wholistically.

During her many visits to Switzerland, the demand for her new piano study method increased more and more. That’s why in 2006 she founded a music academy in Central Switzerland with great success. Since then she is also the founder of the „Schneemann-Klavierschule“ and the „KlavierSuperLeicht – Online-Academy“ for online piano students, which are trained in group lessons by her growing piano teacher team.

Her piano method was documented by Swiss Television in 2007 and 2017, which caused a very high demand for piano teachers trained in that system. So since then, Mailyn has trained dozens of Swiss piano teachers in her system, has written a piano book series based on the system and has just started to put the piano teacher training online earlier this year.

She started composing first with a pedagogical aim for her piano book series and has also edited the works of composers, which she has trained in her brain based piano learning system.

With „Two stars colliding“ she started composing just for the sake to tell stories, to express herself and to bring hearts into vibration. This maybe is one of the most intimate parts of Mailyn’s artistic life, besides her deep love for singing and the piano. 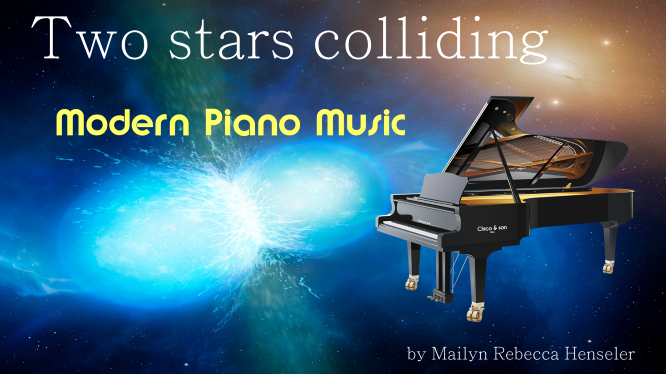 Music is the most intimate way to express myself. It also is an uncomparable way to connect with people and to give them a glimpse of my inner world. Music gives my life depth and meaning and it is the connection between the spiritual realm and our life here on earth. Music has always been my best teacher, counseler, encourager and friend. It doesn’t expect - but it demands. It demands to truly understand the laws of nature, the combination of structure and imagination, of logic filled with love, as I love to say. To facilitate students to learn to play the piano in an uncomparable efficient way, which evokes imagination and logical thinking at the same time, is one of the most fullfilling activities I could imagine for myself – besides composing and playing and singing myself.

If music was all about fantasy, everything else would also be! Music evolves in a realm we could call fantasy, yes, but it only comes into existence by structure and mathematic conditions. These are the vehicles, which is mainly causing the beauty or music. Most people aren’t aware of the fact, that the more symmetric and well organized a face, building, flower etc is, the more beauty we find in it! For example a church – its beauty comes from its perfectly designed and often symmetric structure. And so it is with music. So – to answer the question – music is a living and fluid structure which is organized by the composer in a very playful and imaginative way.

I think I would be in acting and/or in medicine. I am very interested in both.

I have the theory that the audience for classical music is rather old because understanding classical music often only comes with the age. When people grow older, they tend to be more open to the depth of this kind of music, because it also needs a certain degree of maturity to understand classical music, if you were not blessed to grow up with it. So in my opinion there will always be more older people in a classical audience than younger ones. But maybe I am wrong. Maybe one day we will accomplish that youngster will no longer be bullied for listening to classical music, as it very often is the case now, but will be treated with respect for their love for classical music because classical music is seen as what it really is – a stairway which is connecting heaven and earth because it helps reflecting ourselves in a way which is uncomparable. Just listen to the 11 minutes of Tchaikovsky’s 2nd movement of his 5th Symphony – melody lines of such elegance and beauty.

Yes, there is always a transformation in any part of society so why should the role of music stay the same? I think the availabilty of music, mainly due to streaming platforms, has drastically changed the way how we consume music today, but it has also changed a lot for musicians. In the future, I hope that people become more conscious about the power and depth of especially classical music. As I earlier already mentioned, I also wish that classical music will lose its old-fashioned reputation and get the place in peoples consciousness which it has deserved.

I think musicians have become much more creative as in the past when it comes to market themselves and make their music available to the public. But there is still potential. Creativity when it comes to composing of course IS the central part of the process! Creativity is told to be the highest level of intelligence so when you compose you have to use musical and physical laws in a way, which is (hopefully) new in a certain way and which, in the ultimate intention, touches the heart, mind and the soul. There is also a lot of, which I call „grace“ in the process of composing, because you cannot be creative on pushing a button! One needs to be in the mood and for me I also need to have enough space and time for myself if I want to write a piece. And sometimes heaven touches earth and new dimension show up. If this happens, creativity is the door to miracles and the soul feels lifted up and sometimes also enlightened by this kind of music. This kind of music touches many parts of the human system at once so the listener feels connected in a very mysterious way.

Children need to have their first contact with classical music in a pleasant and playful manner, as early as possible. Most young people hear classical music in the retirement home, when they come to see their grand-parents. That’s definitely NOT the ideal setting for the first contact with classical music! I also think that’s why classical music still has this „oldy“ touch, because youngsters nearly never get in touch with it except they play a musical instrument themselves. They also need to understand that listening to classical music by no means mean not to listen to other music any more! I LOVE classical music, but I can’t here it all day long! I also hear Pop, Jazz, Country sometimes and I loves Irish Folk when I was young. I also think that musicians should go to pre-schools at least once a month to give a concert which is tailored to the little ones and to show them, how classical music tells stories. Because that’s what not only children need – food for their spirit, emotion and soul.

As I have written a series of piano schools based on applied brain function in learning the piano, I have composed many pieces on a pedagogical background. „Two stars colliding“ although is totally different. It is my favourite piece which I composed and with this piece I started composing to express myself. Maybe this piece also saved my life. It was born within only 3 days during maybe the toughest time of my life. It has been the dearest of my pieces until now. With „Two stars colliding“ I tell the story when two souls meet, „collide“ and really everything changes. Nothing stays the same and both of them know it. They know that the rules for their lives have changed irreversibly and the solid orbit, where life took place before, has just dissolved into stardust before their eyes. Its feels like dying and being born at the same time.

Go to concerts and if you don’t manage to go alone for yourself, ask somebody to accompany you! Listen to classicals streams, find out what you like and then listen more of that. Maybe you can start with George Gershwin. I like his music very much, especially his „Porgy and Bess“ as I have had the chance to sing the Soprano roles several times in concert myself. I suggest George Gershwin because I think Gershwin’s music is very near to what young people are used to listen nowadays – short, rhythmical pieces which pretty melodies. I think a good point to start from.

Yes I do. In the same way I express my thoughts and feelings when I talk. I want people to understand me. I never compose only for the sake of composing. I compose to touch people, to help them feel themselves more and to bring their souls into vibration.

I am very looking forward to composing more in the future, but first my main projects are to bring this revolutionary way of learning the piano into the world and to be a musician (singer and pianist) myself.