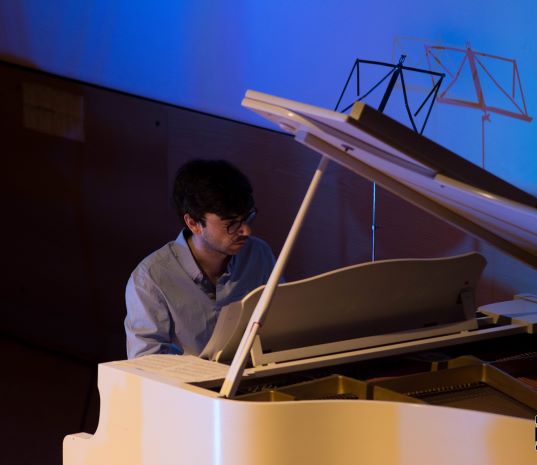 Born in 1995, Aurélien Hallopeau is a French composer who currently mainly writes for a cappella choir and piano solo. Engineer in the space industry by profession, he dedicates a lot of his free time to music.

In parallel to scientific studies, Aurélien managed to follow a rigorous musical training at the Conservatoire de Courbevoie, France. He first started studying the piano. In 2009, driven by the desire of trying to create his own music, he started composing, at first mainly for piano solo. In 2011, he joined the harmony and analysis classes, and then the composition classes of Alexandre Benéteau. He settled in Lausanne, Switzerland in 2017, where he is a member of the chamber choir Ensemble Vocal Evohé and of the Choeur Universitaire de Lausanne.

Some of Aurélien’s pieces were premiered during concerts at the Conservatoire de Courbevoie, France and during events organized by Ecole CentraleSupélec, Gif-sur-Yvette, France. In October 2020, British pianist Maria Marchant created Arabesque, a major work for piano solo, written as a tribute to Claude Debussy, as part of her 7 notes in 7 days at 7pm project

To me music is something that has a power on people’s mind. It can provide hope, pain, joy, or help go through difficult times. It is also of course a powerful instrument of expression.

I am actually an engineer by profession. Music is something I do during my free time (and I never have enough time for it!). So I guess I would have been an engineer.

I am not so sure the classical music audience is getting that old, so I am not worried about the future. The thing is that many new music genres emerged during the 20th century. Some of them may be seen as easier to listen to, more accessible or “more fun” (e.g. for dancing…), and young people may be more attracted by them. Besides, these new genres have sometimes been created in opposition to the strictness and complexity of classical music. Today’s classical music has disconnected a bit from this rigorousness, but the cliché that this genre of music is less accessible is still widely spread. Nevertheless, I think that as they grow, people tend to get interested in other kind of music and they often turn themselves towards classical music, also as they have become more informed. Therefore, maybe classical music is a type of music that older people listen to, and that is why the audience seems to be getting older, but this may have been the case for several decades already. Besides, you can see on social media that a young audience is interested by classical music: several YouTube channels and Instagram accounts dealing with classical music, managed by young musicians and intended for a younger audience, are becoming very popular these days. Think also about the piano tutorial videos on YouTube and about young artists like Jacob Collier.

I think the role one finds in music is something very personal and really depends on the person. So maybe we should not label this role in general. However, for sure, the role of music is no longer only to entertain people. In a world where more and more people suffer from anxiety or other psychological issues - even more in the current health crisis - maybe music could have a therapeutic role with a cathartic effect to help people get better.

Today, we have the chance to be able to discover interesting and creative music of many “unknown” composers online. Most of them use the traditional composition techniques, which shows that beautiful music can still be written, and that composers do not necessarily need to be “more creative” in terms of inventing new composition techniques. It is sure that other techniques could be and will be developed, but to me, today’s musicians have to keep in mind that writing music which is too complex to be appreciated by non-informed listeners is maybe not the best path of creativity as it would turn part of the audience away from this music. A good example of a composer who manages to develop new techniques which gives to his music a particular sound while being accessible is Arvo Pärt (for instance with his Tintinnabuli). On the other hand, the goal of today’s music should not be only pleasing the audience and making money, as it sometimes tends to be, I think. Creativity should stay at the heart of the musical process so that every composer manages to develop they own style. Authenticity is important. You can still please the audience while being original.

The younger generation spends a lot of time on social media, so I think that something we can do (and many of us already do it) is improve our presence on social media like YouTube or Instagram, by posting photos, short videos or doing live concerts for instance.

When I compose, I usually start by improvising on the piano to come up with new ideas. I also like to listen to music to discover new works and composers - this can be a way of finding ideas for the atmosphere of the piece I am writing. Then, I usually sing a lot. Singing helps me to think about the ideas I have, to develop them and get new ones. I also think a lot about the structure of the piece and about what I would like to convey with the piece (tribute to someone, describing an emotion or a landscape for instance). Composition is all about correctly organizing ideas, so structure is essential. Once I have some ideas and the overall structure of the piece, I usually follow the flow. Composing is also an iterative process during which you refine the piece you are writing. This is why I try to regularly take a step back on what I am composing. I think that when you spend too much time on a section of a piece, you tend to become “blind” and to no longer see that what you are writing may tend not to sound so well. That is why it may be relevant to come back on the section a couple of days later, with a fresh mind, and to make changes if you are no longer convinced of what you wrote. My favorite piece that I composed is a work for piano solo which is called Arabesque. It is a tribute to the French composer Claude Debussy, one of my favorite composers, who really influenced me. I wrote it in 2018 with the idea of using impressionist colors, while bringing my personal touch, in order to convey what Debussy’s music means for me. This work was premiered by British pianist Maria Marchant as part of her 7 notes in 7 days at 7pm project: https://youtu.be/jMnFqbX8me0.

I am composing a lot of choral music at the moment, and a few projects related to choir should happen. For instance, when the health situation will allow it, my piece for a cappella SATB choir O Magnum Mysterium will be premiered by a chamber choir in Switzerland. You can listen to a demo recording here: