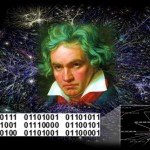 How is classical music going to be affected by the digital age? The other day I was watching YouTube video of Digital Life Design Conference with the speech of Joe Kaeser who is the president of the large German corporation Siemens. He was talking about what is so special about digitalization. His message was that If companies do not adapt, they will be gone in 10 years. “Out of 10 employees 9 go down and one goes up”. The popular belief is that digitalization affects others and never oneself. What about the classical music with the reputation of being very traditional and conservative?

In the first part of this blog, I would like to write about some recent developments in the field of digitalization that affected the classical music.

The good thing about the digitalization is that it can eliminate the tedious and time-consuming activities. In the digital age, the information can be collected, stored and retrieved easily and in no time. Perfect -- nearly all music scores are available online thanks to IMSLP Petrucci Library with free public domain and many others. Today the musician does not even need to print them and can play from the electronic devices like iPad in concert and avoid the stress of the page turning. The radio stations use Internet to air their music. It gives an advantage of additional information that you can find about the music that you hear. Composers can put the music directly in the music score programs by drawing it with a pencil on the touchscreen and get it printed. The musical instrument digital interface (MIDI) will “play” the written music so that you can immediately hear what you compose. You do not have to play an instrument to try it out yourself.

But the heart piece of the classical music digitalization is the recording of music. The ephemeral nature of music excited the imagination of scientists and philosophers who wanted to stop the beautiful moment, to capture it and to make it eternal. There has been an amazing technical progress since the very first mechanical recording ever made by Edison in 1878 and his Mood Change parties where he presented his first discs to demonstrate the emotional impact and the power of recorded music. The history of recorded music knows many innovations:  reproducible discs, radio, LPs, tapes, Walkman, CDs, mp3 and mp4, youtubes…

We are obsessed by the possibility to capture the sound. It should sound even better than in a real life. And we want to capture the emotions too!  From time to time, there were some voices warning about the adverse effect of modern technology. Like the march king, John Philip Sousa, who would write an essay about the “Menace of Mechanical Music” with the possibility to “deteriorate our musical taste”. The progress of technology makes the existing devices available to the majority, as price gets lower. In the past the big recordings companies would approach maestros for the audio recordings. Today it is mostly up to the musicians themselves to finance their first CDs. There are cheaper possibilities. Hardly any emerging musician does not have a youtube video. In fact, there are so many youtube videos that the matching items in the search overwhelm us.

One digital development leads to another. The abundance of music and the chaos of youtube brought the idea of customization. Business idea of “curating classical music” was born (see, for example, Idagio). New platforms offer you to listen to music that would fit your mood. They help to quickly (!) find the right music, to discover new recordings, enjoy classical music on the go.

Some people say that the recorded music is “frozen“, it reminds of the frozen fruit in the fridge.  It is much more exciting to watch the transmission of live concert online.  We are speaking of streaming. The streaming makes the atmosphere of the live concert possible at home, now you do not need to leave your room to experience the symphonic orchestra who are playing at the other end of the world. Surely, the transmission is still not perfect. There is more to be done:  better sound to show the dynamics and nuances of timbre, the 360 feeling, and connectivity to a big high quality TV screen. Everything to make the virtual experience to feel like a real one. The augmented reality could help to put the virtual objects in our reality as if it is a part of it. Imagine bringing in the musicians or the instruments into your sitting room through augmented reality – it is magic today but reality tomorrow!

Digitalization is capable of eliminating the human work. There are self-playing pianos like Spirio by Steinway or Pianodisc by Yamaha: the technology is amazing! It is possible to show the nuances of playing by, for example, Sergey Rachmaninov, whose audio track from 1939 is integrated into a complex system within the grand piano and the keys are pressed by electronics, as he would have done it himself. The live generated sound is coming from the piano. The producers of these pianos advertise that you could organize house concerts without a pianist anytime!

The digitalization is all about speed too. The social media could spread the music in one second; Music has never been as present in our lives as it is today. Social media spreads the feeling that everybody has the equal chance of being heard all over the world. It is a misleading belief as the reachability in the digital world depends on the key factors of the “secret” algorithms. The big part of the algorithms depends on the budget that you are willing to spend on pushing the keywords within your Search Engine Optimization (SEO) activities. New companies appeared on the market: the Multi-Channel Networks (MCN). Their main goal is to do everything for producing and marketing of videos. At the beginning of Internet age, there was still a chance for unknown high quality musicians to be found. As the quantities in Internet have exploded, it is now a question of the algorithm and setting the amount of the budget.

What are your observations about the recent developments in the field of digitalization for the classical music? Thank you for sharing your thoughts.