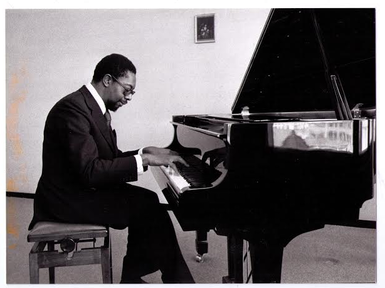 Oswald (Ossie) Russell, christened Selbourne Oswald Alfred Russell, was born in Kingston, Jamaica on August 16th, 1933. His mother, Winifred Russell, was a respected teacher, engaged in shaping the minds of Jamaica’s future. His father, James (Jim) Russell, was Registrar of Births and Deaths in the parish of Kingston & St. Andrew, literally recording the comings and goings of society in the then British Crown Colony’s capital.

Oswald Russell’s path to a distinguished international career in music began with piano improvisation at age three. His mother immediately sent him to noted Kingston music teacher Ena Helps with whom he studied piano and keyboard harmony. He attended high school at St. George’s College concurrently, successfully completing British overseas examinations in academics and music administered by the University of Cambridge and the Associated Board of the Royal Schools of Music, respectively. By 1951, he had earned a Licentiate of the Royal Schools of Music (LRSM), and had served as pianist for a high school production of Robin Hood in which his classmate, Lawrence Burke (later Archbishop of Kingston), played the title role.

Beginning his overseas studies at the Royal Academy of Music in London, England in 1951, Oswald Russell worked with pianist Eric Grant – a musical descendant of Tobias Matthay, and composer Lennox Berkeley – a disciple of Nadia Boulanger and close friend of Benjamin Britten, winning the Walter Cecil MacFarren Gold Medal for pianoforte playing and the Worshipful Company of Musicians Medal upon graduation in 1956.

Oswald Russell’s pursuits then led him to Paris where he not only acquired French as his second language, but studied for two years with Jacques Février – celebrated exponent of the music of Maurice Ravel. In 1959, Russell enrolled at The Juilliard School in New York City on full scholarship. For three years, he worked with Edward Steuermann, noted Arnold Schoenberg disciple and champion, garnering yet another award – the prestigious Harriet Cohen International Music Award.

Decorated with accolades and equipped with the finest Western European music education, Ossie Russell returned to his beloved Jamaica in 1962 to teach at the Jamaica School of Music and direct the Holy Trinity Cathedral Boys’ Choir. It is no accident that the pianist, composer, teacher and conductor was to become a trailblazer in the quest for a Jamaican musical idiom in the newly independent nation.

At age 19, Ossie had already composed the music for the Ivy Baxter Dance Group’s performances of Fishing by Night at the five-day Military Tattoo celebrating the coronation of Queen Elizabeth II from June 2-6, 1953. An audience of nine thousand showed up for the dress rehearsal alone, and it is estimated that fifteen thousand Jamaicans were in attendance each night at the official event. So it was inevitable that, in 1962, he was commissioned by Rex Nettleford, co-Founder and Artistic Director of the nascent National Dance Theatre Company of Jamaica (NDTC) to compose the music for two seminal choreographic works, Legend of Lovers’ Leap and A Time to Rejoice. Again in 1963, he was engaged to compose the music for Games of Arms.

Blessed with a musical talent unfettered by geographical and cultural bounds, Oswald relocated to Switzerland in 1964 to live with his aunt, Marion Russell, who was then posted at the Jamaican High Commission (Embassy) in Geneva. He wasted no time in enrolling at the Conservatoire de Musique de Genève to study with pianist Louis Hiltbrand and composer André-François Marescotti. He was awarded the Premier Prix de Virtuosité avec distinction in 1965.

A dazzling flurry of artistic achievement marked the next five years: a solo appearance with the Orchestre de la Suisse Romande in Geneva performing the Rachmaninoff Piano Concerto No. 2 in C minor in 1965; a piano recital debut in London at Wigmore Hall, also in 1965; first prize in both classical and jazz categories at the First International Improvisation Competition in Lyon, France in 1967; second prize at the BBC (British Broadcasting Corporation) Mozart Piano Competition in 1968; a subsequent tour of Africa as soloist with the Collegium Academicum de Genève Orchestra playing the Beethoven Piano Concerto No. 2 in B-flat Major that would launch a concert career on the stages of Great Britain, France, Switzerland, Germany, Yugoslavia, Italy, Spain, the Republic of Zaïre, Canada, Russia, and the USA, both as soloist and in chamber music ensembles.

In the field of composition during this five-year period, Oswald Russell wrote the music for producer Daniel Farhi’s Les Vieilles Lunes, receiving Honorable Mention for his film score at the 1969 Cannes Film Festival. He composed his most well-known and performed pieces for piano solo, Jamaican Dances, in 1970; and completed a ballet score for D’Alpha en Alpha (1970), commissioned by the historic Institut Jaques-Dalcrozede Genève.

In 1971, Oswald Russell met the 26 year-old Danielle, a native of Geneva, who would become his partner and confidante for the next 41 years. They were united in marriage on October 30th, 1971 by their Pastor, the Reverend Dr. Philip Potter, Secretary General of the World Council of Churches.

Ossie and Danielle immediately immersed themselves in family life as well as the cultural life of Geneva. Six years later, after four miscarriages, they were blessed with their only child, ‘Sunshine’ and Ossie’s ‘Best Sonata’ – Alexandra Caroline Odile Russell – on January 3rd, 1978. In a most touching hommage, Danielle describes her Ossie as an irreproachable husband and a more than attentive father. She continues,

Profoundly religious, he is constantly preoccupied with the well-being of others, and that of his little family in particular. Thanks to his legendary kindness, his uncommon modesty, his innate sense of moral values, Oswald Russell inspires general admiration. He has an impressive social network in the musical and cultural world as well as in the diplomatic world where his family has moved for several generations, and he wants his wife and his daughter to be integrated in it. He also regularly invites them both to restaurants, to art exhibitions; he takes them to the Opera, showers them with gifts, organizes trips abroad. They are the center of his life.

Both at home and in the public sphere, Oswald Russell demonstrated exemplary citizenship, balancing devotion to his family with a life-long dedication to music and to humanity. Participating with Danielle in the nurturing of their daughter, Alexandra, she would grow up to earn a Bachelor’s degree in Psychology from the University of Geneva, defending her thesis on the emotional reactions of infants to music; and she would land a position as principal violist of the Orchestre Symphonique Genevois. Alexandra would then go on, to pursue post-graduate studies in International Human Rights at the University of London; and eventually, to record her father’s Rhapsody for Viola and Organ (1988) on the compact disc entitled Russell par Russell.

Oswald, in the meantime, not only substituted for his piano professor, Louis Hiltbrand, on occasion, but created and instituted ground-breaking courses in Keyboard Harmony and Piano Improvisation at the Conservatoire de musique de Genève for classical musicians and future professional music teachers. In addition to the pianistic virtuosity displayed in his numerous concert tours with family by his side, he became a highly respected professor and international adjudicator, appreciated for his exceptional pedagogical competence at the Conservatoire de musique de Genève and the Institut Jaques-Dalcrozede Genève.

Ossie’s life was soon hanging by a thread. In her first book, Le Loup Blanc (The White Wolf), author Danielle Russell writes that as early as 1982 – a dark year for their family, Oswald Russell had to undergo five successive surgeries, including two cranial trepanations, due to a medical error. If it were not for her unwavering support and efforts to preserve him from all kinds of stress, he might not have survived “several dramatic interruptions in his professional life.”

Oswald Russell wrote his last work in 2009, a Fantasy for English Horn and Organ. He died in Geneva on July 2nd, 2012 from an aortic dissection at the age of seventy-eight. He is resting at the Cimetière de Saint-Georges in Geneva, Switzerland in hopes of the Resurrection in which he firmly believed.

Paraphrased and edited by Paul Shaw with permission from Danielle Russell

Jamaican-born pianist Associate Professor of Piano at the University of Minnesota School of Music, Paul Shaw talks to Moving Classics about Jamaican Dances.

Oswald Russell, from all accounts, was an excellent improviser – a creative attribute that is typical of the casual, amateur musician in Jamaica to this day. He was also an accompanist for dance groups, notably Jamaica’s National Dance Theater Company (NDTC), in his teens. Perhaps, these factors led him to formal music composition in the first place, and to the idea of the Dance for his piano piece(s) that you will record and feature on your program.

Jamaican Dance No. 2 is based on a traditional Jamaican folk-song entitled Sammy Dead, hence the strophic form. Here is the portion of the text to which the piano piece alludes:

Sammy plant piece a corn down a gully,

And it bear till it kill poor Sammy.

This folk-song belongs to a sub-category called a “digging” song, in which the leader of an enslaved work gang initiates each phrase in rhythmic synchrony with the wielding of a digging implement in the field, then the rest of the group follows suit in a concerted effort, both vocally and gesturally. The singing literally accompanied and supposedly relieved the physical burden of engaging in manual labor.

In 1964, Sammy Dead was popularized in an upbeat ska version sung by Eric Monty Morris thus:

In 1970, unlike Eric Monty Morris, Oswald Russell adopts the inherently sad tone of the original folk-song, wherein Sammy is killed out of jealousy over his success as a farmer, rather than due to the unfounded accusation that he was a thief. In Russell’s treatment, the melody is framed by a syncopated ostinato rhythm in the right hand and a three-voiced chordal introduction in the left hand, both mirroring the signature of West African indigenous music. Of course, the slow dissipation and final disappearance of the ostinato rhythm at the end of the piece depicts the cessation of Sammy’s heartbeat.

The lasting genius of Oswald Russell’s Sammy Dead is the message of hope and transcendence in the midst of tragedy that he miraculously conveys. Indeed, he captures the essential mystical quality in the Jamaican psyche as it contemplates the reality of Life and Death.